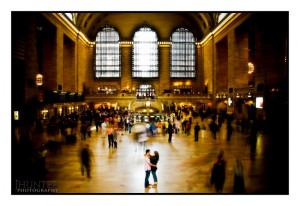 When I was married, we had no money so I bought a dress on sale at David’s Bridal for $500 – including all of the crap that goes with it – and my sister in law did my hair. I bought the minimal flowers – daisies – a few bouquets and boutoniers from a flower shop just because I liked it’s name – “Consider the Lilies.” I found a photographer who taught at RISD part time and hired him on the cheap along with disposable cameras on the tables. We chose a wonderful old gothic church that didn’t need decoration and rented an old mansion called the Arcade in Roger Williams Park Zoo for the reception. When the rain poured down that day, we still had outdoor photos on the deck and micro brewed beer from Trinity Brewhouse, who catered for us. We hired our favorite live jazz band from the Custom House in Providence for music and everyone danced and even sang on stage. The day for us was a celebration of who we were together and all of the things we loved and shared in the place that we met and called home. It wasn’t about looking like a model in my photos or 2 inch thick paper stock invitations embossed with our signature logo. We didn’t prance through corn fields holding hands in the sun beams or stare into each others eyes under the Brooklyn Bridge at dusk for engagement photos either. We had no money so we had to be creative, and I am very happy for that..

The marketing of marriage is constantly thrust upon me, whether it is in magazines or Facebook, and I find it truly hilarious. I especially love looking at the glamour shot engagement photos. Everyone has the same shot in Grand Central and Central Park – you know you’ve seen it too. I would think the last thing I would want is a photo that looks just like everyone else’s – but alas, when I used to work at “the Blue Box” people traded bridal photographers like Garbage Pail Kids. I think it may be a status symbol here in the Big Apple, oddly enough.

And the dresses. My office used to be across from the famous Amsale on 5th Avenue so many of the girls I worked with would purchase dresses there for their big day. My poor little Gloria Vanderbilt whose lace hem I thought was so pretty and understated looks like some sad schmata compared to the runway Moniques and Veras I have seen, but I loved it nonetheless. It’s absurd that there are entire television programs devoted to wedding dresses – more than one! The Lifetime network probably has 3 alone. Women in New York also trample each other for off priced Vera Wangs on a certain day of the year. I’ve seen it on the evening news.

If I could do it all again and if I actually had some cash this time, I wouldn’t really change anything about our day. Maybe I would have nicer flowers or more champagne, but we created our own day and I haven’t been to a wedding like it before or since. When I look at our photos I don’t relish how perfect the lighting or staging is, I just marvel at how young and happy we looked. It’s been almost ten years, 2 houses, 1 dog and a baby later. We have wrinkles, have lost some hair and gained a few pounds. So maybe I didn’t look like the most awesome princess in the universe on my wedding day. I have never been one to want that in the first place. I can gladly say that as great as my wedding day was, my marriage has been far greater. I’d rather have incredible photos of each other from all of the places we have travelled then some schlocky picture post card I can send so people think I’m in love.

a 'tail' of two friends

Unearthing truth, virtue, beauty and joy amidst the dreck

Life full of Jewelry and cats

because anything is possible with Charisma

Beautiful photos of hiking and other outdoor adventures.

"Overstand the definition, then write your own."

a blog about real life. the good, bad and ugly.

Not just a blog, a philosophy